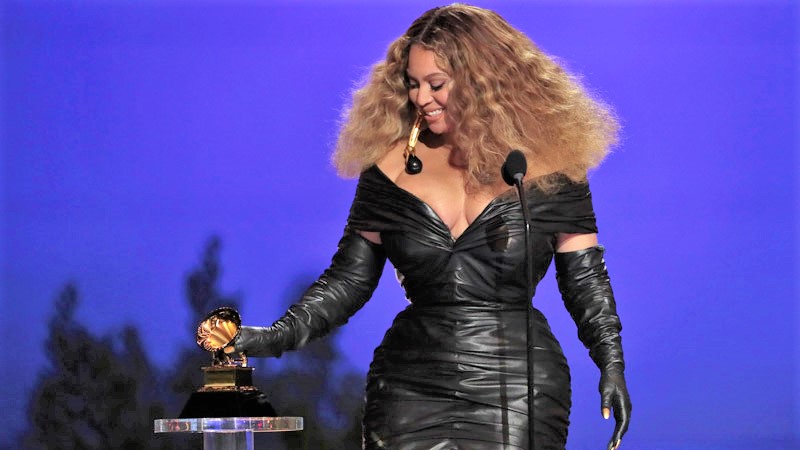 Beyoncé! The most-nominated artist at this year’s Grammy Awards just made history, becoming the woman with the most awards in the show’s history.

Earlier tonight, Beyoncé tied Alison Krauss’s previous record when she won her 27th Grammy for Best Rap Song alongside Megan Thee Stallion for “Savage,” then proceeded to break it with her 28th Grammy win, in Best R&B Performance for “Black Parade.” “This is so overwhelming,” Beyoncé said in an emotional acceptance speech after a standing ovation.

“I’ve been working my whole life, since nine years old. I can’t believe this happened. This is such a magical night, thank you so much.” She is now tied with Quincy Jones as the living person with the most Grammys.

In total, Beyoncé won four awards tonight, also claiming trophies for Best Music Video for “Brown Skin Girl” and Best Rap Performance for “Savage,” also with Megan Thee Stallion. “As an artist, I believe it’s my job and all of our jobs to reflect the times,” Beyoncé said of winning song “Black Parade.” “And it’s been such a difficult time, so I wanted to uplift and encourage and celebrate all of the beautiful Black queens and kings that continue to inspire me and inspire the whole world.”

And to top it all off, she shouted out her Best Music Video co-winner (and daughter) Blue Ivy herself.

“Blue, congratulations! She won a Grammy tonight,” added Beyoncé, like any proud parent would. “I’m so proud of you, and I’m so honored to be your mommy.” We’re proud of you, Beyoncé.

Tiger Woods Spotted On Crutches in Rare Appearance since Crash