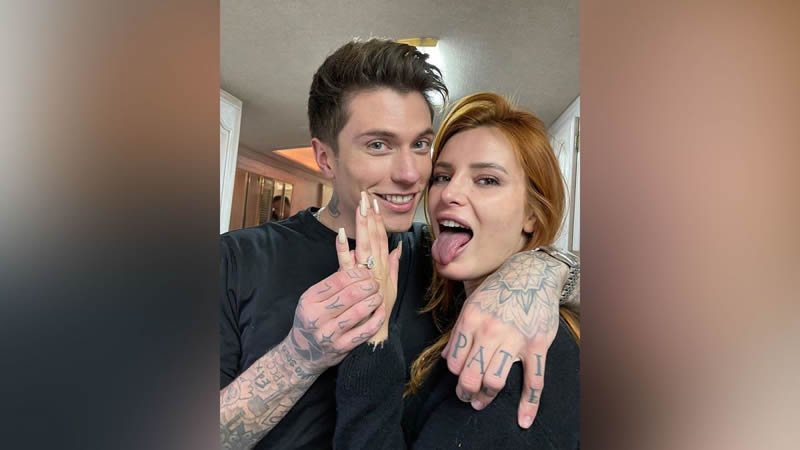 The actress and influencer flashed her new diamond engagement ring in a social media video, revealing she has accepted her Italian boyfriend Benjamin Mascolo’s proposal.

The 23-year-old, whose exes include Mod Sun, reality TV star Scott Disick, Gregg Sulkin, and Tana Mongeau, has been dating the musician for two years.

In the big reveal footage, Benjamin gushed: “Thank you for being amazing, baby. I love you so much. Yay, we’re getting married. Celebration in Italy and America both (sic).”

An emotional Bella added: “I love you so much. Now give me a kiss.”

The actress held her left hand up to show off her new oval-shaped bling.

Bella and the Benji & Fede star were separated for over five months by the COVID-19 lockdown last year. They reunited in Mexico over the summer.

“After 5 months reunited & it feels so good,” Bella wrote beneath photos of the couple embracing in the sunshine.

The stars jetted off to Cabo San Lucas to be together as they would have faced a lengthy quarantine spell if they had staged the reunion in America or Italy, due to coronavirus restrictions.

Benjamin also shared a snap of himself kissing his girlfriend, adding the caption: “My heart is exploding. I missed you so much.”

Meanwhile, the couple is teaming up professionally later this year for teen romance Time Is Up.

The musician will make his acting debut in the film, directed by Elisa Amoruso, which follows the story of two high school seniors brought together following an accident.

George W. Bush Says He Was ‘Shocked’ by Public Reaction to His Friendship with Michelle Obama