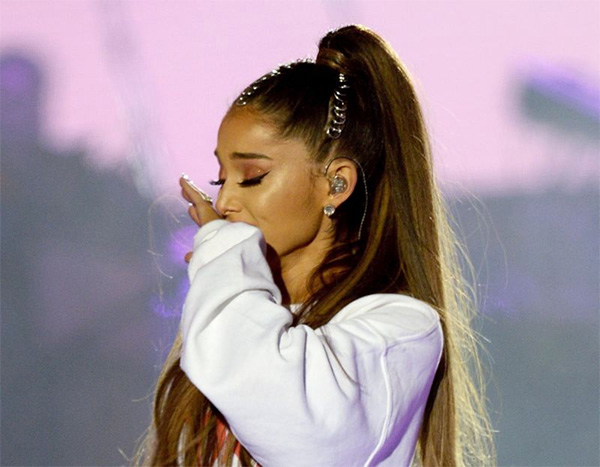 The 23-year-old singer hosted the major benefit concert in the wake of the terrorist attack after her concert in the city two weeks ago, which left 22 people dead. Stars including Miley Cyrus, Katy Perry, Take That and Niall Horan took to the stage at the Old Trafford stadium to the delight of 50,000 fans who had crammed into the venue. And following the concert, the British Red Cross, who have been fundraising for their Manchester Emergency Fund, which was set up after the attack, tweeted: “We’ve raised an incredible £2.35 MILLION during #OneLoveManchester! Thank you so much for your donations.”

The amount means the British Red Cross has raised a staggering $12 million (£9.6 million) for the fund, which “will help alleviate immediate suffering and ensure victims and their families do not face short-term financial difficulties,” the organisation explained in a tweet. Ariana, who visited those injured in the 22 May attack at Royal Manchester Children’s Hospital on Friday, was overcome with emotion at several points during the concert, including when she closed the gig with a heartfelt performance of Somewhere Over The Rainbow.

A further terrorist attack in London on Saturday night had led to speculation that Ariana may pull the plug on the concert, but the singer opted to stand strong in the face of the attackers. Ariana’s mother Joan, who was instrumental in helping get young fans to safety after the Manchester attack, was also present at the One Love Manchester gig, walking through the crowds and urging fans not to be scared. One fan, who grabbed a selfie with Joan, tweeted the picture and wrote alongside it: “Ariana Grande’s mum is strolling through the crowd telling fans: ‘do not be afraid’ #onelovemanchester.” While stars at the concert praised Ariana for setting up the gig, others who weren’t present took to Twitter to congratulate the singer for hosting such a successful benefit.

John Legend, Sheryl Crow, Ellie Goulding and Fifth Harmony all tweeted their respects for the star, while British journalist Piers Morgan apologised to Ariana after initially criticising her for leaving the U.K. immediately after the Manchester attack. “I misjudged you, @ArianaGrande & I apologise,” Piers wrote, alongside a picture of Ariana performing with a children’s choir at the gig. “You’re an admirable young woman & this is a magnificent night. Respect. #OneLoveManchester.”