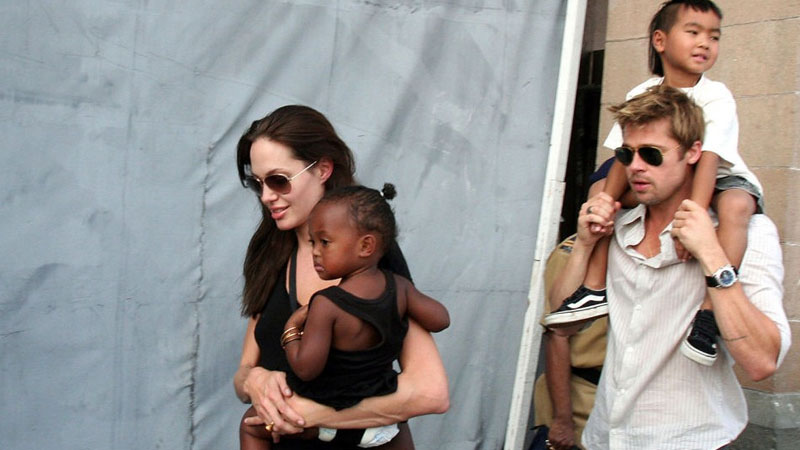 Celebrities are the same as the common man and their divorce is painful and difficult. In April 2019, the great couple Jolie and Pitt were officially divorced and they got the title of ‘Ex’.  All issues were resolved but custody of children – remains unresolved.

45-year-old Angelina Jolie and 57-year-old Brad Pitt – had a roller coaster life together. During five long years of their marriage, ups and downs, pits and bumps – and all this have been going on. Twice as long as Jolie and Pitt were officially married.

From the beginning of the marriage till filing the divorce in 2016, Angelina demanded sole custody of the children. The freenews said, “Brad is fifty-fifty, that is, joint. Years passed, and he managed to get permission to at least see the children in the presence of psychologists or his ex-wife. Later, after satisfying Brad’s complaint about Angelina’s actions, which prevents even these limited dates, he was able to spend much more time with the children than at the beginning of this sad story.”

And in May, a regular court session was held under Judge John Uderkirk, who was officially hired by the spouses for such a process. (“Private judge” – such a concept exists in the complex system of American jurisprudence.)

Apropos, Angelina has frequently tried to remove him under the excuse that the judge had some kind of contact with Pitt’s lawyers in the past. It was observed that that Uderkirk is opposite to her and seeks to protect, first of all, the interests of her ex-husband. The press can only be judged by the “leaks” that most often appear from the team of the actress.

Now, it seems that the dust has been settled and the judge ruled in Pitt’s favor. That is, he gave him the right to equally share the custody of the children, not counting the older, 19-year-old Maddox, who, by law, must decide for himself with whom and how much he wants to communicate.

The “sources” say it is only about adding another portion of changes in favor of Pitt to the custody agreement. And these changes were made based on the experts who asked for child safety and psychology, who have worked intensively over the past six months.

The experts interviewed the children and told the judge what they found. The rumor was heard that Angelina strongly disagreed with the decision and intends to continue the fight in the court of appeal. Where is he going to get the replacement of the “unfriendly and unjust decision” judge?

Angelina also opts for the lawsuits demanding the disqualification of the judge and allowing the children to testify against their father. “Judge Uderkirk denied Ms. Jolie a fair trial, unlawfully excluded her testimony related to the health, safety, and well-being of children, which is critical in considering their fate.

The judge arbitrarily rejected her request to allow the three youngest children to act as witnesses, ready to make an invaluable contribution to the consideration of the issue of custody, expressing their wishes, requests, and needs.” In the papers, it was pointed out over and over again that Brad Pitt is a person with a “history of domestic violence,” and this must be adequately responded to and taken into account when making a decision.

Pitt immediately filed counterclaims in response. The lack of real “new” evidence of his guilt, lack of confidence in Jolie’s forensic evidence, and so on. Protracted litigation affects the emotional state of the children. Well, stuff like that.

There are two main points in this story – Jolie’s demand to allow younger children (according to California law, they have the right to do so, but with the permission of both parents!)

To testify, Pitt is all cleared from the domestic violence charges brought against him by Jolie in 2016. Hitherto, his group of attorneys has managed to prevent such a test for children. Moreover, the eldest son Maddox 19-year-old has already testified in this closed trial.

His eldest son has become the main bone of contention and the cause of the scandal in the star family. It was his testimony that formed the basis of the accusation in 2016 after the quarrel between Pitt and Maddox during the fateful flight of the family from France to the United States. However, all allegations against Pitt were drooped off in the same year.

Though the judge wasn’t convinced he delayed his decision. And Pitt’s lawyers all this time argued that the leakage of such information in court, including with the help of children as witnesses – is intended to incite public opinion against the actor. And it will provoke the isolation of the children. Time passes, they grow, and their dad still has the right to communicate with them for much less time than joint custody allows.

Jolie is ready to recourse to any means again and again in order not to allow any indulgences for her ex-spouse. Including using children to hurt and hurt him even more. And she continues to do this, allowing the relevant documents to “leak” about “new and irrefutable” evidence and evidence. What she supposedly has and is ready to shoot at the right time, as that very gun on the wall …

Brad once said in an interview: “I was completely knocked over on my back and chained by a system designed to protect children.

Fortunately, we were able to sort things out together. And we both try to do everything in our power and the best interests of our children. Once a lawyer told me: “Nobody ever wins in court. The only question is who will get out of there with the least losses. Who gets hurt more? How true it is – now I am convinced of it.”

Angelina, always said that they are “healing” – both she, and Pitt, and the children. And she also said that they “try their best not to harm the children.” Cited her mother as an example. How she worried about Angelina as a child – they say, that’s also why the actress doesn’t want children to be included in this story.

Jolie’s father, actor John Voight, cheated on his wife, and then left with two children altogether. Angelina said that she prefers “to cry in the shower, in the bathroom, so that the children do not hear and see her in such a depressed state.” After all, they need to know that everything is fine even when it is not at all so. She wants – consciously or unconsciously – that Pitt suffered as much and as deeply as she did. Does this mean that he suffers less? Probably so in her eyes.