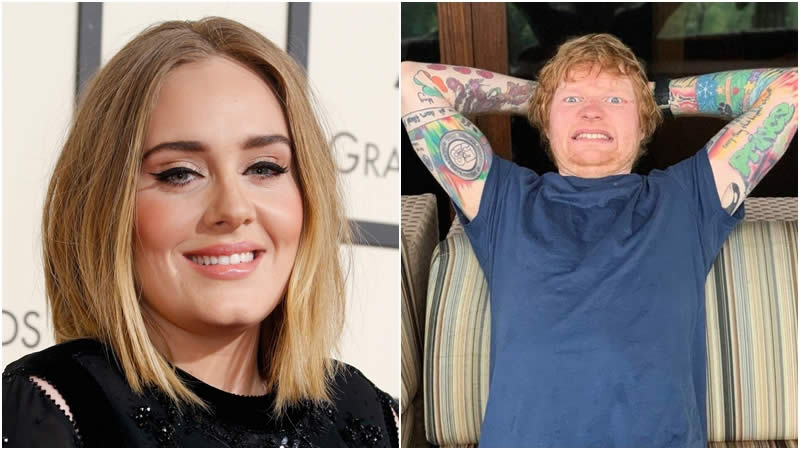 When Adele revealed her new album will be released next month, musicians were quaking in their boots and rushing to change release dates. And the Easy On Me singer reckons even other chart heavyweights should be breaking out in a cold sweat.

Adele remarked that Ed Sheeran should be worried because his fourth studio album will be out around the same time as 30.

As per Metro, following the release of her comeback track Easy On Me, the 33-year-old was doing the promo rounds this morning and stopped by Heart to talk about her upcoming fourth album.

Host Jamie Theakston said: ‘Ed Sheeran’s got an album coming out at the same time.’

The singer laughed and said: ‘I ain’t panicking. He can panic.’

There’s no beef, though, with Adele adding: ‘No, I love Ed, and I really love his wife Cherry.

In any other year, and Ed Sheeran album would be the greatest seller, but this year, = (pronounced Equals) will face stiff competition.

His album, which includes the singles Bad Habits and Shivers, will be released on October 29, just three weeks before Adele’s 30 is released on November 19.

When Ed’s last album, Divide, was released in March 2017, it spent nine weeks at the top of the charts before spending another 11 weeks there.

However, it appears that = will only be at number one for three weeks before Adele arrives – unless 30 underperforms (don’t make us laugh).

When Adele’s last album, 25, was released in December 2015, it spent seven weeks at the top of the charts before returning for another six weeks.

Her second album, 21, was even more successful, spending 11 weeks at number one in 2011 (for a total of 23 weeks at number one) and became the best-selling album of the twenty-first century.
Adele has written 30 about her divorce from Simon Konecki and her ‘self destruction, self reflection, and self redemption.’

Adele tries to explain her reasons for the split to her nine-year-old son Angelo in the lead single.

She told British Vogue: ‘I just felt like I wanted to explain to him, through this record, when he’s in his twenties or thirties, who I am and why I voluntarily chose to dismantle his entire life in the pursuit of my own happiness. It made him really unhappy sometimes. And that’s a real wound for me that I don’t know if I’ll ever be able to heal.’

Next Friday, Easy On Me is expected to take number one on the charts.