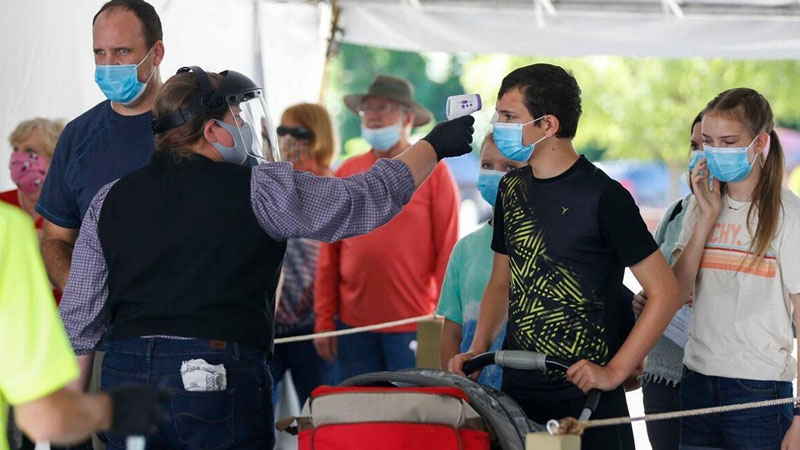 The media and the public should stop freaking out about the Delta variant of Covid-19, according to an op-ed published by prominent physician Dr. Monica Gandhi and Kyle Hunter of the University of California San Francisco.

The op-ed piece was published in SF Gate on Wednesday. Gandhi studied medicine at Harvard and is Associate Division Chief of a UCSF division handling the infectious disease. Hunter is a medical student.

In the piece, Gandhi and Hunter call out the news media for “fear-based headlines” about the Delta variant, which is fast becoming dominant in the United States and has already become dominant in many countries. According to the scientists, such headlines “focus on evidence of its increased transmissibility”, as well as the Delta variant’s “particular ability to “breakthrough” vaccine protection”

This collective concern has led to renewed calls for masking in places like Los Angeles, differing recommendations from the CDC versus the WHO, and worry about “the impact that the variant may have on a return to school.”

Calm down, the scientists urge. In the San Francisco Bay Area, nearly 80% of the 18+ population is already vaccinated against Covid-19 with at least one dose, and more than 60% are fully vaccinated. Even in areas with lower vaccination rates, the scientists point out, a “significant pool of natural immunity in areas that were tragically hit hard by the virus” provides additional protection.

In short, a huge number of Californians now have protection against the virus, either through vaccination, natural immunity, or both. The state is moving along well in the direction of herd immunity, the scientists imply, and some areas may already be there.

Why does that matter? Because as Gandhi and Hunter point out, case rates of the Covid-19 coronavirus, driven largely by the Delta variant, are no longer coupled to hospitalizations and deaths. “The significance of this decoupling cannot be overstated”, the scientists say.

Although the Delta variant and its breakthrough infections are causing more cases in California, the scientist points out that only 300 patients in the entire state of nearly 40 million people are currently in the ICU as a result of Covid-19. And those cases, the scientists say, are “tragically among the unvaccinated.”

The takeaway? According to Gandhi and Hunter, “We are now in a “control” phase in our state.” Infections will crop up due to variants like Delta, but if you’ve been vaccinated against the virus, these cases shouldn’t matter. They’re likely to be mild and are very unlikely to result in hospitalization or death.

Looking at case rates, then, is no longer a good way to judge the impact of the virus. Yet, officials and members of the media keep sending the message that the Delta variant is scary. That’s a big problem. According to the scientists, “Messaging heightened anxiety and new masking guidelines around the delta variant also sends a confusing message about vaccines and their effectiveness.”

In other words, telling people about high case rates and the rapid spread of a new variant creates fear for no reason. Based on hospitalization data, the vaccines coupled with natural immunity are working amazingly well to protect Californians, Delta or not. Sending the message that vaccinated people need to be afraid of the Delta variant implies that vaccines aren’t good enough to protect us. And based on the data, the scientists conclude, that message is false.

Likewise, telling people to mask “just in case” as a result of the Delta variant implies that current vaccines can’t keep the variant in check. Again, the scientists say that’s not true. Instead of fear about the Delta variant, “this remarkable ability of the vaccines in preventing hospitalizations…should drive messaging on school openings, masking, gathering and re-engaging in normal life in communities with high rates of immunity.”

We should be celebrating the effectiveness of the vaccines and encouraging more people to get vaccinated, not freaking out about variants, the scientists suggest.

Further, the scientists say that “As more adults gain immunity, children are protected, too.”, and that “There is no evidence that children have served as vectors for transmission of the virus, have worse long-term outcomes or that the delta variant has led to higher rates of hospitalization in children.”

That’s crucial. One of the scientists’ main concerns about scary messaging around the Delta variant is that it will discourage schools from reopening in the fall.

“Given that California ranks 50th out of 50 states in a resumption of in-person learning during the pandemic, we believe that California should message confidence in the vaccines to persuade remaining holdouts”, the scientists write.

The final message from the scientists? It’s time to calm down and send a message of hope, especially around vaccines. And “even in light of the delta variant”, it’s time to open schools.

Why Is Prince William So Hurt?